The Basics of Total Hip Replacement

It goes without saying how important a normal functioning hip joint is. The joint is formed by the head of the femoral bone nesting within a socket of the pelvic bone known as the acetabulum. The resultant ball and socket joint facilitates movement that makes crucial functions such as walking, running and kicking possible.

Destruction of the hip joint can result from various causes such as osteoarthritis, rheumatoid arthritis, septic arthritis (infection) and trauma among others. The damaged joint is stiff, painful and exhibits a limited range of movement. Total hip replacement, also referred to as total hip arthroplasty is a medical procedure that offers relief and increased range of motion to the affected individuals, giving them a second chance and restoring use to the affected joint.

A total hip replacement surgery is usually an elective procedure. The patient is prepared in advance and made aware of what the procedure entails, the risks, benefits and expected outcome. Traditionally, the procedure has entailed removal of both the femoral head and its socket (acetabulum). These are then replaced by prosthetics that resemble the initial parts shape so that the architecture of the joint is restored and function albeit limited is restored to the joint.

Recent history has seen marked advances in the field of medicine. Researchers have been looking into surgical alternatives for hip replacement and have been successful in discovering alternatives to the conventional approach that has been used for years.

The direct anterior approach method is a form of minimally invasive method that has been advocated for. It offers an alternative to the traditional lateral method that has been used for years. The proponents of this approach cite minimal soft tissue traumatization, a shorter hospital stay and a quicker rehabilitation as the benefits it has over the traditional approach. It; however, has its own share of shortcomings. This technique offers a limited surgical exposure and is not particularly suitable for obese patients and highly muscular patients due to the increased risk of complications such as malposition of the prosthetic parts.

Another recent alternative to the conventional method is the hip resurfacing procedure. In this procedure, the femoral head is not removed. Instead, the rough edges are trimmed and the head is covered with a smooth metal cup. The damaged socket is then completely removed and replaced with a prosthetic just like in the conventional method. The outcome offers a greater range of motion and a near normal walking pattern.

Dr. Raj at Beverly Hills Orthopedic Institute has performed hundreds of hip replacement procedures and is a highly regarded orthopedic surgeon in Los Angeles and Beverly Hills. Call today to schedule an evaluation!

I'm here to help answer your questions. Orthopedic matters can be complicated, allow me to help inform you of every aspect regarding your needs. 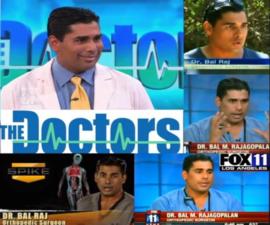 Recognized as one of the best Orthopedic Surgeons in the Los Angeles area, Dr. Raj provides the ultimate in state-of-the-art orthopedic care. His practice is always on the cutting edge of surgical and nonsurgical technologies, such as PRP (Platelet Rich Plasma) injections, stem cell injections for tendinitis and arthritis, minimally invasive surgery and more.